Home » Blog » Communications in Manufacturing: The Rule of Three

Communications in Manufacturing: The Rule of Three 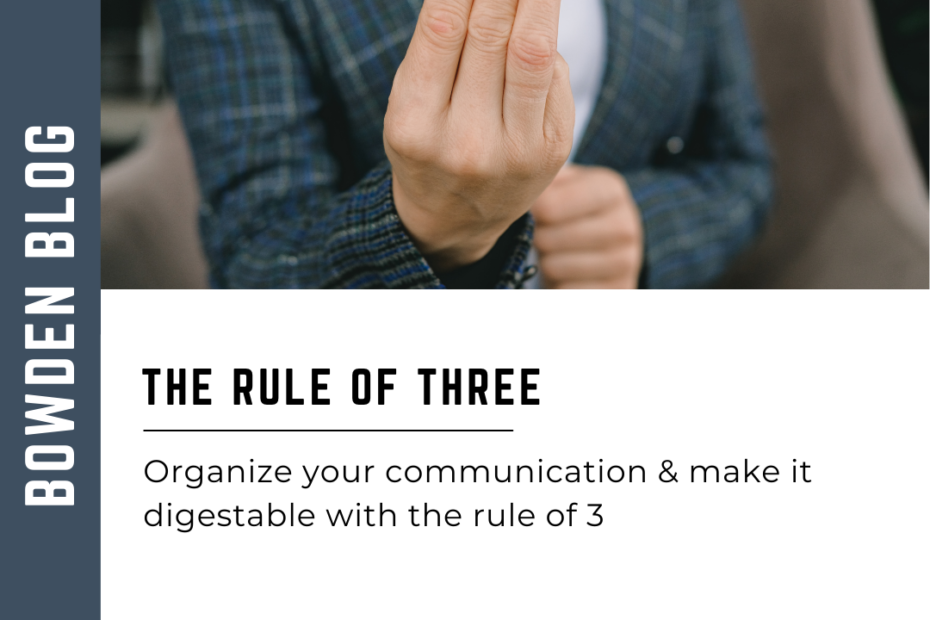 Communications in Manufacturing – The Rule of Three

You have a lot to say.

Understandably, you’re worried that you won’t be able to communicate it all.

However, if you ramble or bury the audience with information, they won’t be able to stick with you.

The solution to your challenge is to make sure that your communication is very organized and easy for the audience to digest. You can do this by using the Rule of Three.

We’ve been discussing in this series that communication is less about providing more information, as it is about carefully selecting and focusing the information you provide for the maximum results.

Limiting your communication to a single Controlling Idea, confining yourself to a particular rhythm of Intent-Obstacle-Plan-Result, and ensuring you swing back and forth between positive and negative are all examples of using structure to enhance the outcome as you communicate.

Sometimes these rules may seem restrictive, but in fact, they simply force you to organize your thoughts in the best possible means of creating effective communication.

The Rule of Three might similarly feel restrictive, but it’s another organizing tool that helps to engage humans at a very deep level.

The Rule of Three in Communications

Simply stated, the Rule of Three is that, as humans, we have an optimal amount of information we can process at any given time, and 3 is the magic number.

When we have lists that grow to 4, 5, or more items, our retention drops dramatically.

And while we can certainly grasp only 1 or 2 items, having less than three doesn’t provide enough to really engage us deeply. Thus, 3 is the magic number. 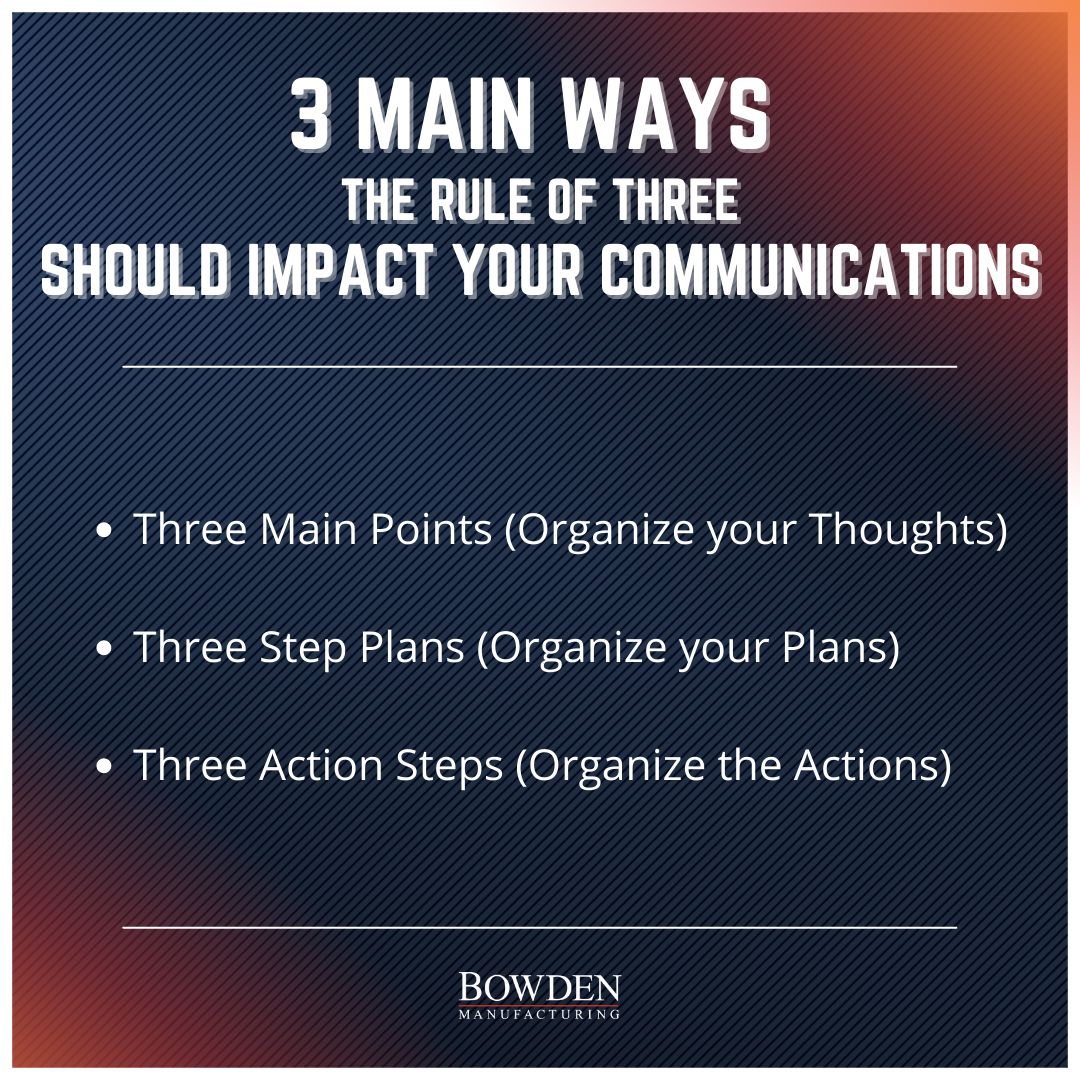 As we’ve discussed in past articles, it’s extremely important that you have one Controlling Idea for your communications.

Identifying 3 Main Points is a huge part of organizing your thoughts for what you will communicate to your audience.  It’s usually easy to make a list of 5-10 items that could support your Controlling Idea, but narrowing them down to three is an organizing step that will force you to prioritize what’s most important.

It’s critical to know that using more than 3 items won’t just limit the audience’s opportunity to forget the extra ones, it will actually reduce the chances that they’ll retain any of them! 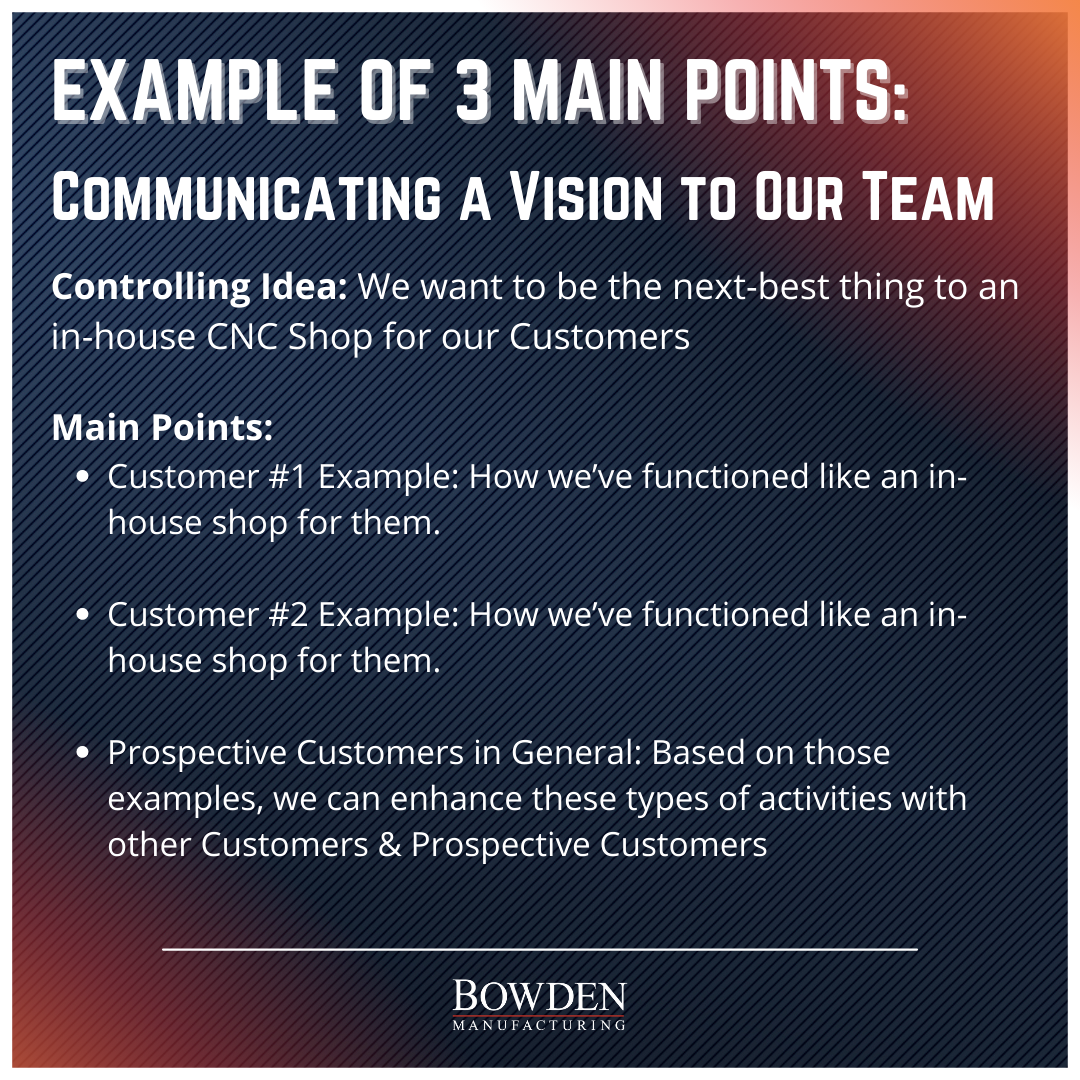 In a previous article, we established the framework of Intent-Obstacle-Plan-Result to succinctly communicate a message and inspire your audience to take Action.

When describing the Plan, it’s important to make it an easy plan so they’ll connect with it. One of the best ways to do that is to make it a 3-Step Plan.

Certainly, it’s possible that the Plan to solve the Problem the audience is facing could have more than three steps.

The Rule of Three tells us to organize, group, or prioritize the actions, as needed, to get them down to 3.

One great way to do this is to group them into steps that feel like the following:

No matter what your Three Step Plan contains, it’s most important that you confine it to 3 steps. Using more than 3 steps won’t just limit the audience’s opportunity to understand the extra steps in the plan, it will actually reduce the chances that they’ll be able to grasp all the steps! 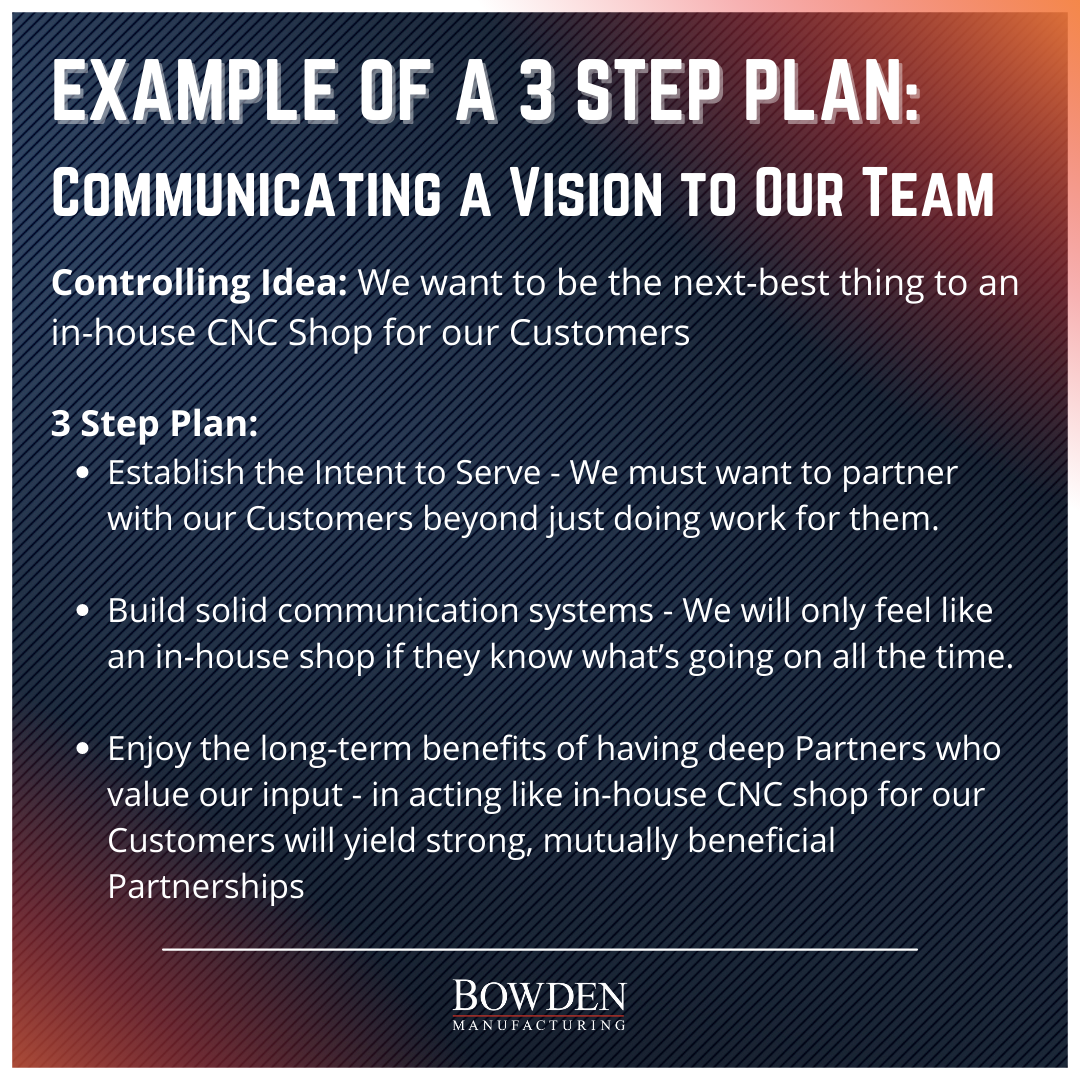 The main goal in communications is to inspire Action from the audience. You want to engage them in the Problem that needs to be solved, share the Plan to solve it, and then Call them to Action to get the job done.

When describing the needed Action, it’s important to make it easy to remember so they’ll connect with it and get it done. Certainly, it’s possible that there will be more than one Action you’d like your audience to take as a result of your communications. There could even be more than just three.

The Rule of Three tells you to organize, group, or prioritize the actions, as needed, to get them down to a list of three.

No matter what your Three Action Steps contain, it’s most important that you confine them to just 3 specific Actions. Using more than 3 Actions won’t just limit the audience’s opportunity to take the extra ones, it will actually reduce the chances that they’ll complete any of them! 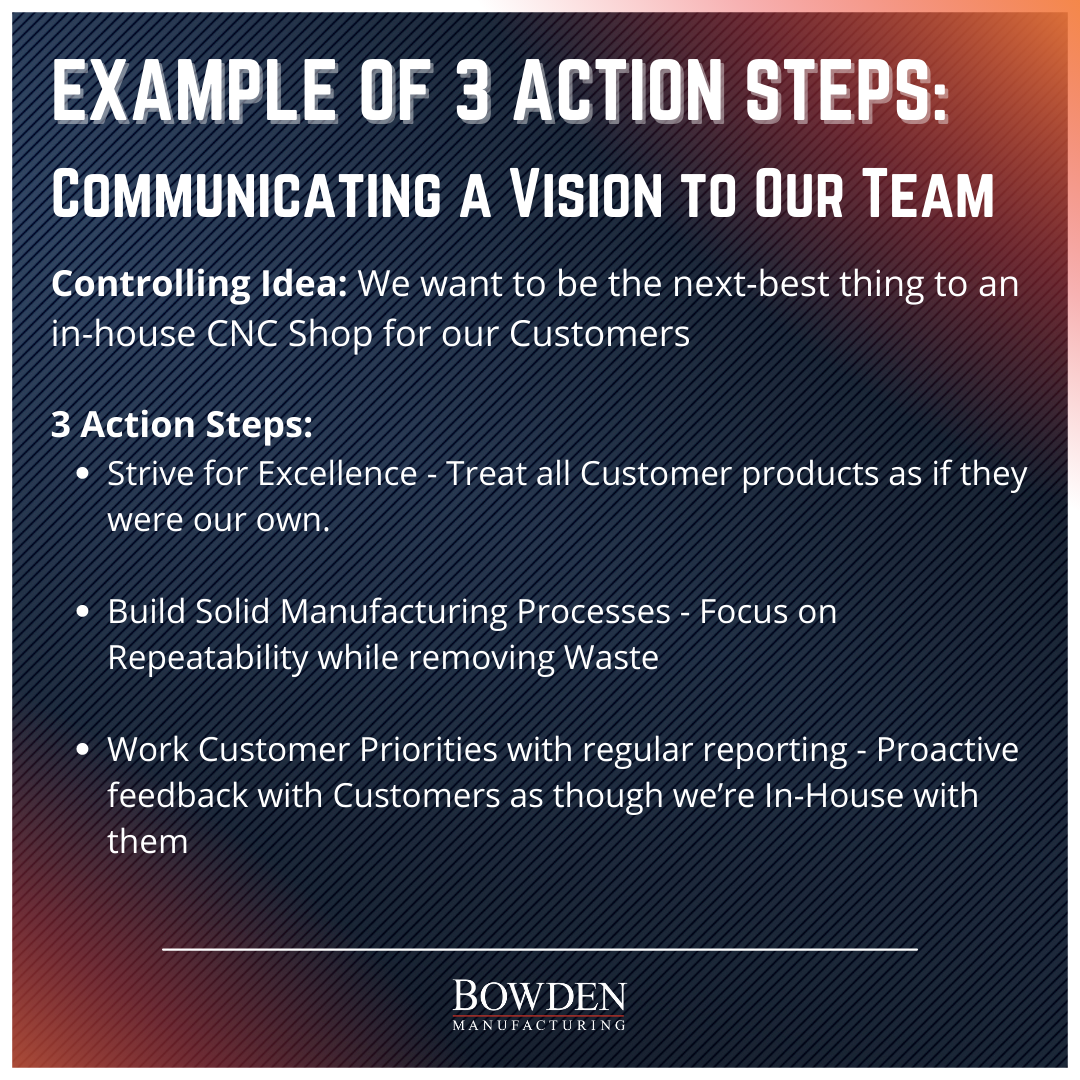 Try the Rule of Three Today!

Here are three ways to try using the Rule of Three today:

The biggest aspect of the Rule of Three is don’t try to sneak in a fourth or fifth point!

Remember, you won’t just sacrifice those extra points…..you’ll lose ground on all of them.

Next week, we’ll go more in-depth with your Weekly Updates with your Team. Making that time both productive and efficient isn’t easy and we’ll share a few tips that will help!

Learn more about custom part manufacturing and get your FREE quote!