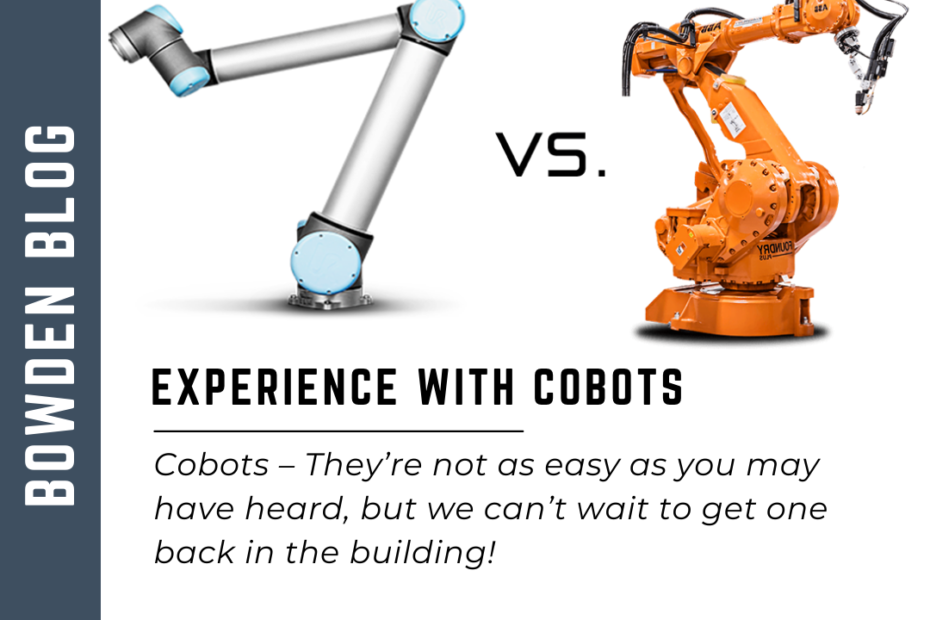 After receiving MAGNET’s first Northeast Ohio Manufacturing Lighthouse Award for our implementation of Industry 4.0 technology, we’re continuing our series this week sharing our experience with Collaborative Robots, commonly referred to as Cobots.

Back in the early 2000s, we purchased a used Fanuc robot to serve in a machine-tending role for $12,000.  The math shows that’s pretty inexpensive, provided it could load and unload a machine with consistency and little oversight required.  At that time, the robots were electrically “integrated” with the machine tool and we hired a Team to help us with the project.  All in all, we spent approximately another $10,000 for their assistance.

We got it proved out in the loading and unloading process for a particular application that ran consistently in the shop, and we were excited to build it up to a “full production” mode.

Unfortunately, we encountered an electrical issue that resulted in frying an Input/Output (I/O) board inside our Haas machine tool control.  Despite our efforts to correct the problem, soon after the I/O board was replaced and we were back in operation, the replacement board also blew up.

We weren’t able to definitely solve the electrical problem and since we couldn’t afford to keep replacing I/O boards for thousands of dollars in further experimentation, we ultimately never were able to get into full production.  Forced to abandon the project due to the cost and effort required, we ended up donating the robot to a local trade school for their student use.  The idea was certainly sound, but the technical challenges were too big for us.

Fast forward to 2018 and we had another application where we believed that automation would be helpful to us.  We had a part that we ran consistently that required both a lathe and mill operation.  On our shop floor, we had two Teammates running a combination of 2 lathes and 1 mill around the clock to keep up with demand.  We believed that employing a Collaborative Robot (a Cobot) would help us to establish a consistent flow of the part while allowing our Teammates to apply their time elsewhere.

The two biggest differences between our earlier history with a Robot, and this new Cobot, were that:

These shifts in the technology made the Cobot a much easier application from the beginning setup, all the way through to the operation.

The Cobot we selected was significantly more expensive than our original, used Robot, but we found a company that leased Cobots to allow us to test drive our application before committing to buy the Cobot.

Programming a Cobot Seems Easy, but It’s Actually Much More Difficult than Expected

With a bunch of young Engineers in our building, they were extremely eager to dive in and help when our Cobot arrived.  Some early training demonstrated the programming methodology and our Engineers quickly dug in.  Less than an hour later, they proclaimed that the programming was “Done”!  They had produced a few hundred lines of code.  Unfortunately, as our experience later showed us, the reality was that our programming was only just beginning.

Yes, our Team had programmed the main motions of the Cobot, but once we started building up the detailed system for unloading, unloading, and activating each machine, things got a bit more complicated.  It’s been said that an initial Cobot program covers 80-85% of what needs to be done if everything goes exactly as desired, while the remaining 15-20% of the program covers all the edge cases and exceptions, where minor issues and errors crop up during the production start-up.  The final program ended up having several thousand lines of code.

It was exciting to get our Cobot running production.  The Cobot cycle included:

Because of the size of the Cobot and its limited arm length, the lathe and mill were located closer to each other than they were when humans were doing the loading.  This wasn’t an issue, as long as the cell operated properly, but we learned early on that it caused a problem for us if anything went wrong.  The idea of the cell was that it would run across all three of our shifts with limited interaction required.

We quickly learned that while the Cobot was able to complete its functions without any issue (it was brand new!), the lathe and mill being tended were of an older vintage and weren’t able to sustain continuous operations around the clock.  The machines, particularly the lathe, would alarm out or have chip evacuation issues that would interfere with the operation.  While running on First Shift, with our Engineering Team available, they were usually able to reset the process quickly so that it could get back up and running.

Unfortunately, on the Second and Third Shifts, we didn’t have the same expertise available to troubleshoot and restore production.  When the system went down, we had one of two choices:

Neither of the above options was ideal.  We needed a steady flow of these parts, so letting them sit wasn’t helping us.  Pulling the Cobot out of the way required both some manual overriding to the unloading and loading of the parts in the machines on Second and Third Shifts, as well as a forcing a significant reset process to properly re-orient the Cobot when First Shift moved to get the cell back up and running.

We tried many different fixes to these challenges and unfortunately were not successful.  We had to remove the Cobot from the cell, relocate the machines for our Teammates to run, and return the Cobot to the leasing company.

Ultimately, we turned to a different type of “automation” shortly thereafter, by purchasing a live-axis lathe that could run the part in one operation.

Called Time Out, but Excited to have a Cobot Back Soon!

It was certainly disappointing to have to abandon our Cobot cell project.  We learned a lot and it was exciting to see the cell in operation when things were going smoothly.  Unfortunately, the machines were simply too old and tired to be able to run around the clock with the Cobot.

We do have other potential opportunities that might be good candidates to be run with a Cobot.  Our preference is to think that we simply called a “Time Out” from using Cobots until we’re in a better position to try again.

When we go back in that direction, we’ll certainly plan to pair a Cobot up with new machines and we’ll build a better plan with more redundancy within the machine tool operations.  There’s no doubt about the utility of Cobots in a Manufacturing environment, but it certainly requires careful consideration when selecting the application.

The use of Cobots is an important part of Industry 4.0 and the technology and applications will continue to be developed in the years ahead.  We’ll be very excited to get back into the Cobot arena with the correct application and we’re keeping our eyes open to the possibilities.

2 thoughts on “Cobots in Manufacturing”