Home » Blog » CNC Pricing Transparency – What Does It Mean & How Does it Work?

CNC Pricing Transparency – What Does It Mean & How Does it Work?

If you’ve done any purchasing in the Manufacturing Industry, you’re familiar with sending out RFQs and receiving Supplier Quotes. It’s a simple process that’s commonly used just about everywhere. The bigger the project, the more involved the process.

When designs are more complicated and the parts are tougher, it’s normal for additional levels of scrutiny on the Suppliers and the quotes.

The typical RFQ process has limited information exchanged – typically just the component drawings and technical information. Multiple suppliers are sent the information, and within a few days to a few weeks, quotes are provided from the Suppliers with pricing and expected lead time for delivery.

Most Buyers send RFQs only to Suppliers that are “qualified” for that type of work, though the Buyer would admit that many of the technical aspects of the components are beyond their understanding. The hope is that by only using “qualified” Suppliers, all the quotes received will be equally valid and the lowest price will be the best choice. Sometimes, (for uncomplicated parts) this approach works out just fine. There is limited exposure to the Buyer if something goes wrong because the parts are relatively simple. The Buyer can complete the process by working with the Suppliers alone and typically doesn’t require additional support from Engineering or QA.

As project complexity grows the traditional RFQ model starts to increase exposure to the Buyer. Complicated engineered products require more detailed evaluations of Suppliers and their quotes to ensure the capability to provide acceptable components. More sophisticated Geometric Dimensioning & Tolerancing (G, D&T) from Engineering will require the corresponding capability in the Engineering and QA Departments of a potential Supplier.

Companies that have these complex projects tend to have a bit more rigorous requirements on the potential Suppliers that will be sent the RFQ packages. Again, the Buyer’s exposure is limited by the smaller pool of available Suppliers. Additional support is typically provided by the Buyer’s Engineering and QA Teams to ensure the Supplier is capable of producing the components, however, this is often done after a favorable quote is received to verify the lowest price can be used. Overall, the process requires additional resources but tends to minimize the inconvenience to Engineering and QA with the Buyer still driving most of the decision-making.

Why Would It Make Sense to Do Anything Differently?

In Engineering and Business, it’s common to evaluate systems by breaking them down into their individual components. Working to optimize each step of the process to improve the overall performance of the system is a good start. However, in practice, the overall system is best optimized by identifying the constraint to the system as a whole and focusing on optimizing it.

In the case of the typical RFQ system, the constraint to maximizing the overall system is an opportunity for synergy between the Engineering & QA Teams of the Buyer and Supplier. The traditional model has almost no provision to engage those groups in constructive dialog. In fact, some RFQ processes explicitly avoid dialogue to ensure consistency and a “level playing field”. The understanding that can be developed between the Buyer and Supplier technical teams is often a huge missed opportunity. 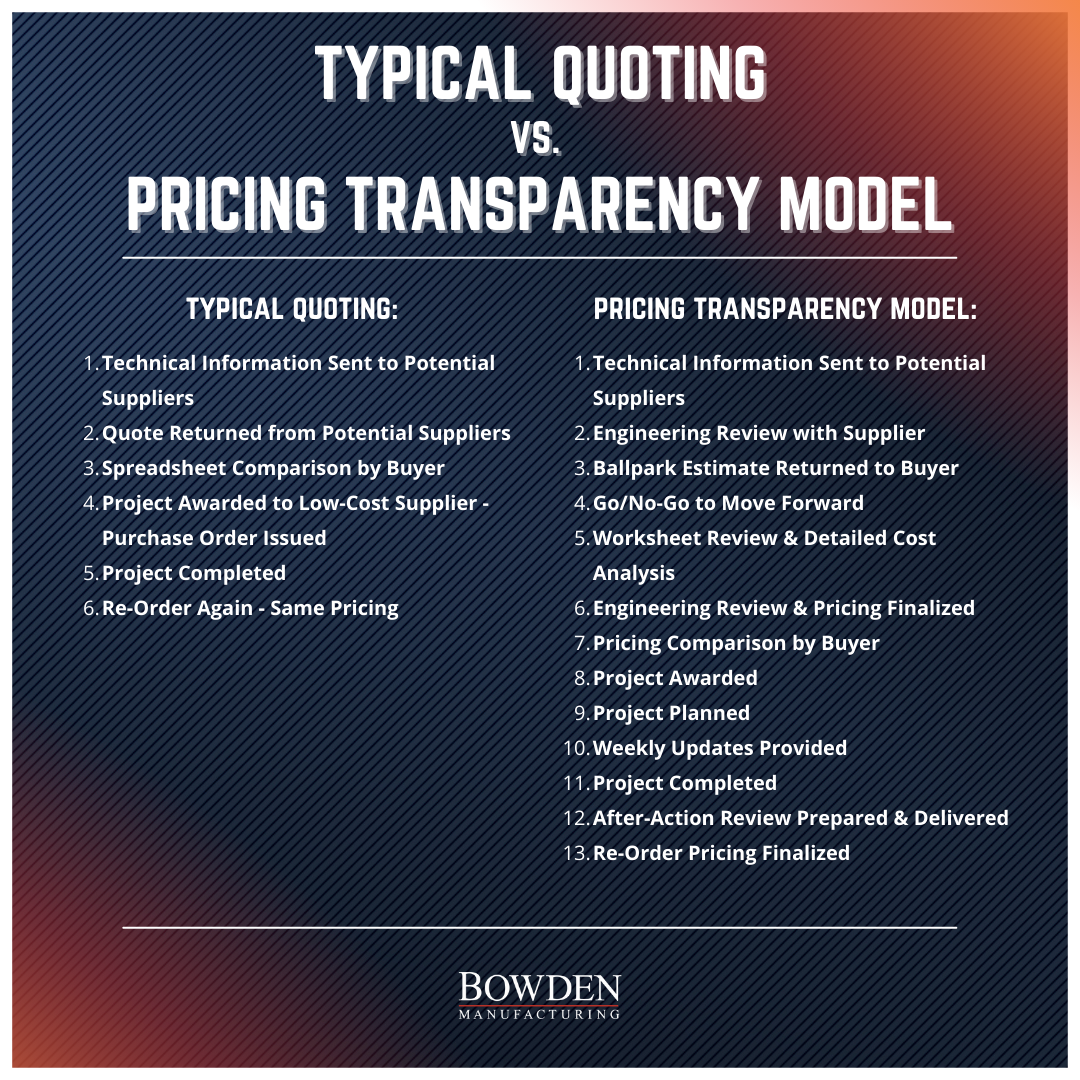 Open Dialogue between the technical teams of the Buyer and Seller is critical in the CNC Pricing Transparency Model…..including detailed cost analysis.

When the knowledge and experience of these Teams are combined, the Design parameters and Manufacturing parameters can be explored to maximize the value created. The more complicated the projects, the more important this opportunity can be.  In the CNC Pricing Transparency Model, the Supplier lays out their project plan with clear costs so the synergy between Engineering Teams is meaningful and directly takes project costs into account.

Unfortunately, the traditional model is usually seen as “good enough” and it’s the most expeditious path when personnel are busy and coordination is difficult. “Good enough” is not an ambitious goal that moves companies forward, it’s the fallback position for busy staff simply doing what they’ve always done. 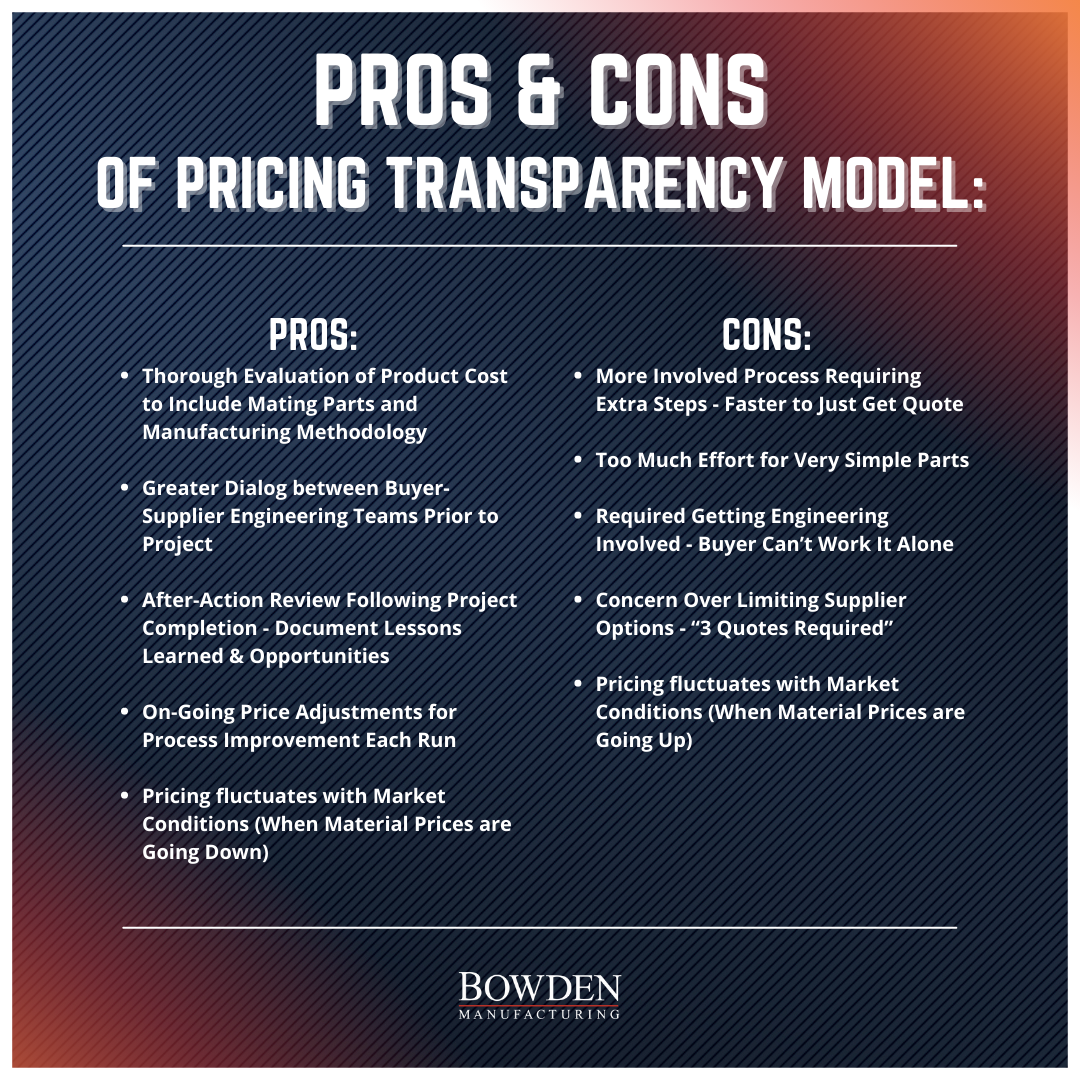 Some companies have engaged in a different model for finding CNC Suppliers for complex projects and it’s called the CNC Pricing Transparency Model. It generates requirements for Engineering & QA interaction between Buyer & Supplier to create that synergy that can both optimize value and clarify communications between the companies.

If you’d like to see examples of the Pricing Transparency Model explained, please join us for the CNC Pricing Transparency Workshop on Friday, August 26th, at 2pm EST on Zoom. If you have a complex part that you’d like to have reviewed as part of the example of the process, just upload it when signing up. Your RFQ process doesn’t have to be limited to the traditional model anymore.