Home » Blog » The One Habit That Can Transform Your Life

The One Habit That Can Transform Your Life 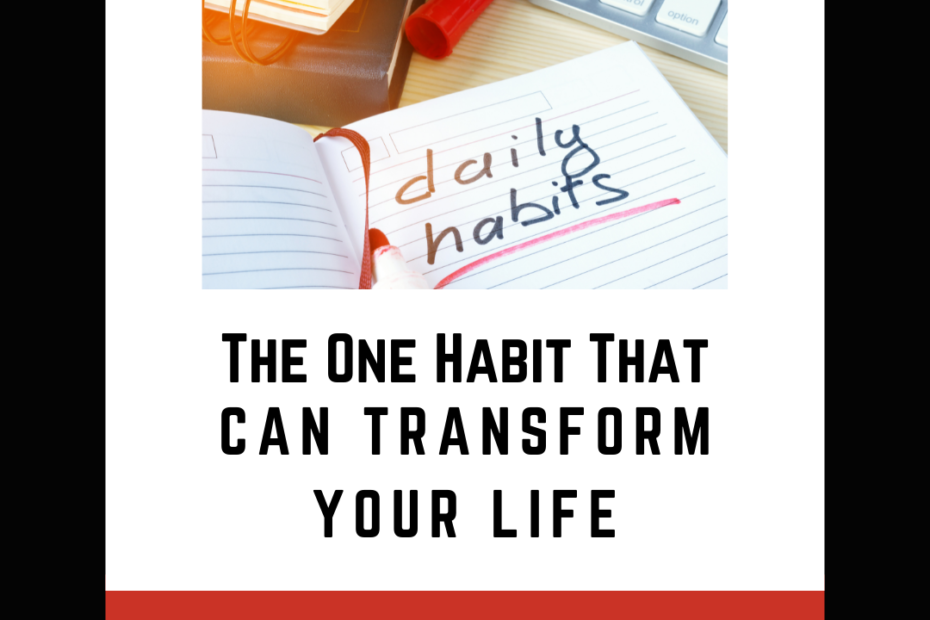 Do you know why do you do the things you do?

If you’re like most people, you like to take credit for your healthy & “good” habits, but your unhealthy and “bad” habits are a source of frustration.

Lack of willpower and lack of discipline are two of the common phrases you might use when beating yourself up. You might even conclude that you don’t “deserve” the success because of your lack of overcoming some of what you refer to as your “weaknesses.”

If I told you that just one habit could change everything for you, would you believe it?

Just One Habit Can Change Everything

I grew up in a family of 3 boys, so as a father of 3 daughters, I had a lot to learn about when it came to raising girls. One big challenge was communicating to them in a meaningful way, especially when they were entering their teenage years, without being accused of “lecturing.” It seemed that whenever a conversation turned remotely serious, their antenna went up and they were ready to shut me down.

This was many years ago now, but at the time I was learning to establish a solid morning routine and decided to add just one action to it … a morning email to my girls. I would send them a brief email with a few thoughts for them to consider, a photo or two, and encouragement that I loved them and was praying for them. At the time, it just seemed like a good idea, but I didn’t know that over time, it would change everything.

What is a Keystone Habit and How Does it Work?

Your habits are never done in isolation.  They are a combination of triggers and cues that you act on in your environment.  They often connect together in chains (i.e. you brush your teeth, then you put on deodorant and then you get dressed), and taking these consistent actions builds up momentum in a direction as they are performed.  Positive habits can produce positive momentum and negative habits can produce negative momentum.  It’s easy to fool yourself to think that our behaviors are isolated from each other, but that’s simply not how we humans work.  Each action you take impacts your future actions.

A Keystone Habit is one that begins momentum. If you find, or create, a positive habit that builds positive momentum (i.e. you put on your workout clothes when you wake up in the morning), it can serve you well beyond just the simple act of the habit by setting up a string of other actions (i.e. you get in a morning workout). Alternatively, if you begin a negative habit (i.e. you turn on the TV immediately after dinner and sit on the couch), it can take you down a less productive path (i.e. you binge-watch Netflix shows while eating junk food until it’s time for bed).

Taking either type of those actions once is not a big deal. However, as the habits form, their power grows, and they can turn into Keystone Habits.

Harnessing that power with a positive habit is a huge opportunity.

When I started my day sending an email to my family as a habit, it quickly expanded in my life beyond the simple act of an email. Over time, I found I was habitually starting my day focused on my family, considering their schedules, expressing gratitude for them, and sharing words of encouragement with them. That Keystone Habit led to other actions that made me a better father and husband.

It’s been over 10 years now and my then-teenage daughters are all adults now, but my Keystone habit continues daily. It’s even expanded to daily emails to more of my family and to our Team at Bowden.

I’m amazed to look back and realize how starting one simple habit, day in and day out for years, became the trigger for so many other positive behaviors.

What’s the One Habit for You?

Do you have an area of your life that you’d like to improve?

It could be at home or at work, but you want to pick something that’s important to you.

Start out doing something that you can do in under 5 minutes each day. It has to be easy … a small, but undeniably positive step each day.

Don’t tell anyone about it and just do it.

Day in and day out, you can start to take control of the foundation of that area of your life.  After a few months, you might begin to expand it a little bit at a time.

An important warning!!! Don’t expand it too fast. If at any time it seems like a burden, you’ll be tempted to skip it and you can lose some momentum.

Important warning #2!!!  If you miss a day, don’t throw in the towel.  Just don’t miss twice in a row!  You’re looking to build this habit into a consistent action you can do each day for the rest of your life.

Pick something and start today!

Even if you don’t land on one that will be a key lifelong one for you, it’s ok. Starting is a huge opportunity and often the biggest obstacle.

Start today and who knows, you might just find the Keystone Habit that will transform your life!